Family Feud is the greatest TV game show of all time. I’d argue we’re in the golden age of the show with current host Steve Harvey, but either way, it’s been around for decades and we’re all more or less familiar with the rules.

There’s a critical part of the game that, for whatever reason, virtually no family plays correctly. After earning the rights to a board, the family is asked whether they want to “pass” or “play.” I’ve seen hundreds of episodes of Family Feud, and I’ve only seen the board passed ONCE. Why don’t more families do this? Is it always in your best interest to “play” the board?

Here are two common scenarios, both of which are based on actual prompts from the show.

Prompt: Name something a baseball player might shove down his pants if he can’t find a cup. (Yes, this is an real prompt used in a real episode of Family Feud that aired on television.) 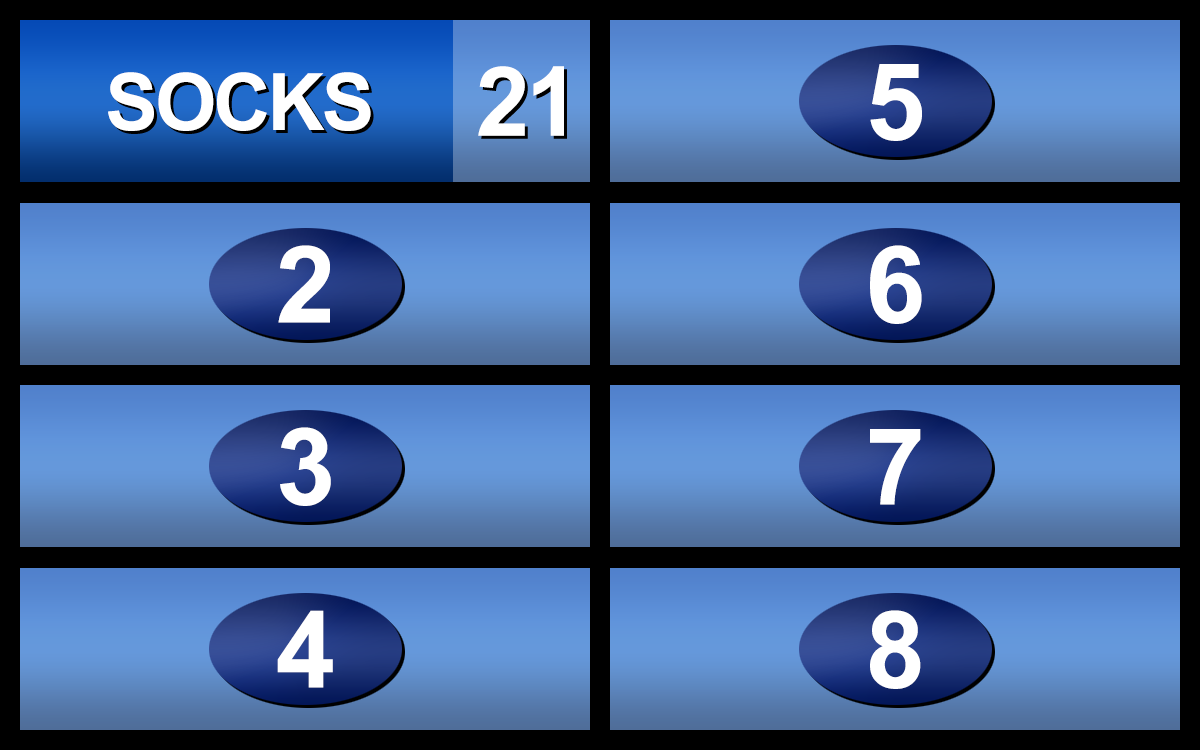 First of all, this is one of the dumbest prompts I’ve ever seen. If a baseball player couldn’t find a cup, he wouldn’t just shove some random object down his pants. I certainly wouldn’t, at least, but maybe that’s why I never played at the next level. Either way, let’s take a quick look at the math.

The number one answer “socks” came in with a relatively low 21 points. Assuming there are 100 total points on the board (sometimes there are less if the producers disregard low-scoring answers), we have at most 79 points left. Spread between the 7 remaining answers, that’s an average of 11.3 points per answer.

In this scenario, you should play. Given the high average points per answer, your family has a better-than-average chance at clearing the board and keeping all of the points.

Prompt: Name a profession that requires you to interact with a lot of drunk people. 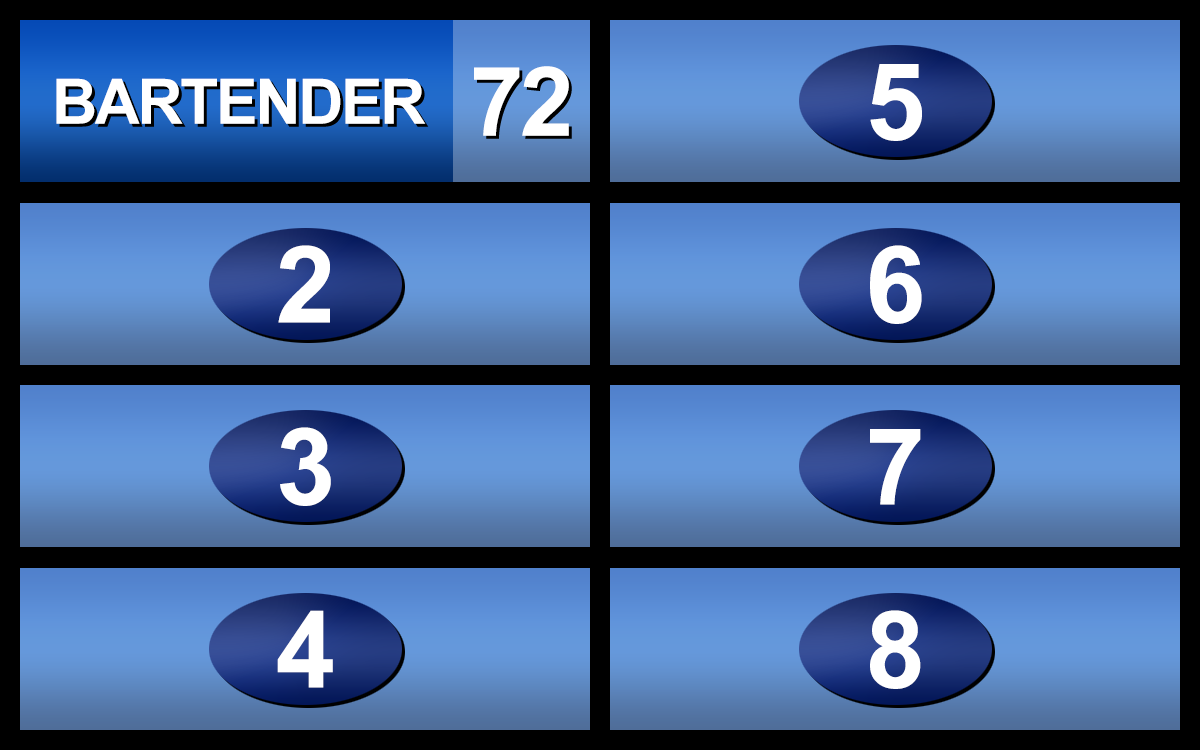 The number one answer “bartender” came in with a whopping 72 points. With at most 28 points and 7 answers remaining, we’re left with an average of 4 points per answer. Just four. Do you know how stupid the answers are when they get that low? I wouldn’t be surprised if four people said “Mormon priest.” (By the way, “comedian” wasn’t on this board and I was furious.)

In this scenario, you should pass 100% of the time. It’s extremely unlikely that the other family is going to clear the board, and your family has an excellent chance of swooping in and stealing the points.

Another benefit of passing to the other team is TIME. While Steve Harvey’s over there cutting up with the Flannigan family — asking ‘em about their jobs and making fun of their ties — you can actually take your time, consult with your own family, and agree on a sensible answer. All you need is one good one, and the points are all yours.

What do you think? Am I insane or have 99.99% of Family Feud’s contestants been playing the game incorrectly? Let me know.

Obviously I’m answering 18 months later so I doubt anyone will read this, but I agree.

Some of the prompts (and answers) are so ridiculous.

It annoys me when the family say “Play” then the first member Steve approaches can’t think of an answer!

Glad someone else feels the same way.

Absolutely. Thanks for commenting, Paul! It annoys me as well.

True I get the fun and adrenalin but I like to win.

In my mind, passing in Family Feud is like taking insurance in blackjack. Almost never a good bet.

I think always playing is the right move because there are 2 ways to win instead of 1 but some statistical analysis here would be helpful.

I think its definitly a case by case thing that should be taken into consideration. But I totally agree that it’s foolish to play 100% of the time. And I’ve never ever seen anyone pass. Ive played the “table-top” version of this game with a group of friends. I forget what the scenario was, but I chose to pass on one of the prompts. My team was mad at me for a few minutes, but we were able to steal the points.

This is a well written and lengthy post that attempts to answer the classic play vs pass question. Unfortunately falls well short and results in a clickbait title. The only way to answer this question is with statistics. You have provided none. Your arguement is pure conjecture.

Best Answer Yet!! Steve would love this answer. You clicked a link, read the long written question and then followed that up by answering, “I don’t know” 🤷🏻‍♂️
This is the number one answer!!

I agree it seems nonsensical but probably because 2 ways to win if you play vs one if you pass? Still agree with your post.

So, I did a bit of math. I don’t know if I did it right, but… I tried to come up with a formula for your chance of winning if you pass or play, given the number of answers left on the board and the top scoring answer. It makes some assumptions: 1) only the top answer is revealed, 2) if X% of respondents chose an answer, then each player is X% likely to choose that answer, and 3) the total points on the board add up to 100 every time.

Now, assumption #2 might not be true. If your team on average knows less about a topic than the general population, you’ll be less likely to choose the answers they did with the same frequency. On the flip side, it’s also true that if your team knows MORE about a topic than the general public, you’ll still be less likely to pick answers with the right frequency, as your answers will be “more correct” (and somewhat more obscure) than the average answers. Which means the chance of winning actually falls in a bell curve, and 70%/30% is the best-case scenario. However, that effect would have to move the probabilities by 20% in each direction just to break even at a perfect 50/50, so I don’t think it’s relevant here.

TL;DR: If I did my math right (which is questionable), it is *always* better to play rather than pass, in no small part because it gives you two possible ways to win rather than only one compounded way.

Wild! I believe you mostly because I have no way to check your math. Thanks dude

He didn’t show any math.

Fully agree, like splitting aces in Blackjack. Thank you for the very logical analysis. Just now I was watching a family attempt to play an 8 answer board only to completely fail! 3 strikes after getting 1 answer correct. The other family easily answered their 1 question and stole the points per usual. I’d probably get more intellectual stimulation and entertainment watching the Bachelorette with my teenage daughter.

me either, thanks Timothy

I would disagree. If there are 8 or more answers you are more likely to win with a steal. Nobody ever gets all 8 answers.

Aaron Weber
Author
Reply to  Will

Jack mehoff
Reply to  Will

Will says he disagrees and then agrees lmao. Genius!

There’s a study re this at https://nicholas-boys.medium.com/pass-or-play-a-data-driven-approach-to-family-feud-d523fa4debae

but the first answers are normally the easiest, if you pass, your team may be stuck trying to guess a tougher answer.